“Last year’s Corvette engine build was such a memorable experience that I couldn’t pass up the opportunity to do it again with a COPO Camaro. As a Chevy enthusiast and collector, it’s a real privilege to do something like this,” Hendrick said. “I want to thank everyone at the Performance Build Center for having me back. It means so much to spend time with people who share my passion for cars and work so hard to produce some of the best engines in the world.” 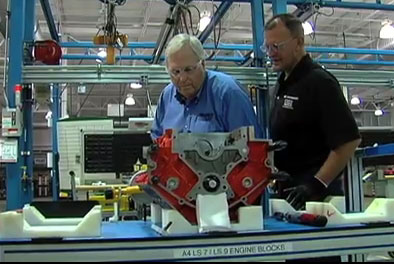 “Building an engine is a time-honored tradition in hot rodding, and this program allows enthusiasts to enjoy that magical do-it-yourself feeling, while still enjoying the value of a GM Powertrain-engineered and factory-warrantied engine,” said Jim Campbell, GM U.S. vice president of Performance Vehicles and Motorsports. “For hands-on hot rodders, these programs truly enable them to say they did it all when it came to building their project. There’s nothing else like it in the industry.”

In March, Chevrolet announced it will build 69 COPO Camaros for 2012, the brand’s first purpose-built Camaro drag-racing specialty car designed to compete with the quickest in NHRA’s Stock Eliminator and Super Stock classes. National records for quarter-mile times in these contests are in the nine-second range. As such, the COPO Camaros are expected to be the quickest Camaros ever offered by Chevrolet.

“The COPO Camaro is going to shake up the sportsman drag racing ranks this summer and give Chevy fans a great new reason to cheer on the Bowtie,” Campbell said. “COPO builds off the strengths that have made the Camaro the best-selling sports car in America. And while it was developed strictly for the drag strip, the COPO Camaro is infused with the same performance pedigree that every Camaro shares.”

The 69-car production for the 2012 COPO Camaro matches the number of “ZL-1” COPO Camaros made in 1969. COPO stands for Central Office Production Order and was Chevrolet’s special-order system used by dealers to build high-performance models in the 1960s.

The new COPO Camaros will be built using factory “body-in-white” body structures produced at the Oshawa, Ontario plant that manufactures regular-production Camaros. They are the same body-in-white body shells available to all racers under Chevrolet Performance part number 19243374.

Founded in 1911 in Detroit, Chevrolet is now one of the world's largest car brands, doing business in more than 140 countries and selling more than 4 million cars and trucks a year. Chevrolet provides customers with fuel-efficient vehicles that feature spirited performance, expressive design, and high quality. More information on Chevrolet models can be found at www.chevrolet.com.