A 1973 Ferrari Daytona festooned with a host of eclectic connections including HRH The Prince of Wales, is set to create a stir when it goes under the hammer at Historics forthcoming sale on Wednesday May 18th, at Brooklands in Surrey.

One of just 158 right-hand-drive 365 GTB/4’s – which adopted the Daytona moniker following Ferrari’s 1-2-3 success in the 1967 Daytona 24-Hour race – the Pininfarina designed Gran Turismo was ordered new by Maranello Concessionaires Ltd. in 1973, as a UK demonstrator model.

Soon after its arrival from Italy however, the iconic GT was loaned to Prince Charles for a week, before subsequently being sold for a seemingly modest sum of £9,250 later that year.

The fastest production road car of its time, this Daytona was purchased in the late 1980’s by John Coombs, the famed ‘patron’ of the 1960’s and 1970’s racing Jaguars and Ferraris, before Modena Engineering Ltd. acquired the car in 1988.

In November 2008, fans of BBC TV’s Top Gear programme witnessed the car take centre stage in a race from Portofino to Saint-Tropez.  Episode five from the twelfth series of the popular motoring entertainment show, ultimately saw James May in an XSR 48 powerboat overcome Richard Hammond in the Daytona, but Hammond was left in no doubt which he would rather travel in, commenting; ”The Daytona is the absolute essence of pure European supercar.”

Demonstrating the enduring quality of the Ferrari Daytona and in particular this model, with just 26,281 miles covered the car was tested on a dynamometer before appearing on Top Gear, in August 2008, and recorded an output of 352 bhp, identical to that claimed by the factory at the time of its launch.

Prices for the Daytona are once again on the rise, and with such an intriguing and appealing history, which also includes numerous magazine features, Chassis 16531 with its Blue Ribot metallic coachwork over full tan hide interior and Borrani wire wheels, is expected to fetch offers in the region of £180,000 - £210,000. 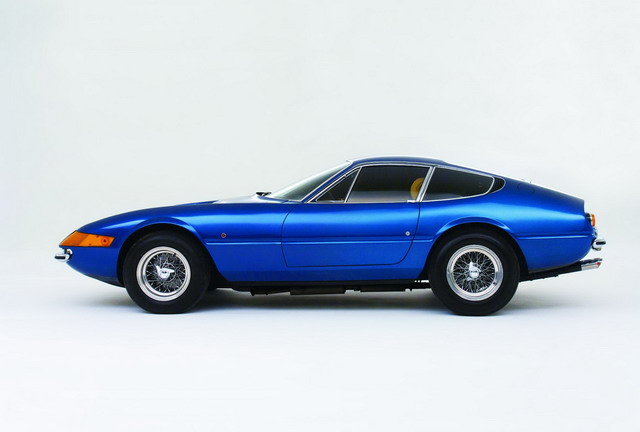