Electric power promises to herald a new era in mobility. To live up to this promise without upsetting the expectations of millions of drivers, the electric car must now show its mettle.

This brand new type of electric GT car exists. Its name is Furtive-eGT. It is a unique new product created by Exagon Motors™.

Born of the demands of racing

For several years Exagon Engineering has been designing and developing electric racing cars which have been facing each other with renowned drivers at the wheel for the Andros Electric Trophy. This unparalleled experience has enabled Exagon Engineering to unlock the secret to electric performance, reliability and autonomy. Now, Exagon Engineering has decided to go one step further by creating the Furtive-eGT, a top-of-the-range electric GT car under the brand Exagon Motors™.

The Furtive-eGT is no run-of-the-mill GT car. It represents a new approach to grand touring, a new experience on the road, a new sports car driving concept with added comfort. Electric propulsion offers entirely new sensations, in part thanks to immediate torque availability. With a constant torque of 480 Nm from 0 to 5,000 rpm, the Furtive-eGT has a phenomenal capacity for acceleration – 0 to 100 km/h in 3.6 s – and can hit 287 km/h on the race track (maximum speed is otherwise limited electronically to 250 km/h). Such high performance is achieved in near-silence, with only the air flow to be heard, heightening the sensations experienced while driving. This is more than just impressive figures, it is a once-in-a-lifetime experience.

French in body, French in spirit

Designed by Exagon Motors™, the Furtive-eGT proudly displays its classical and timeless beauty. It is a modern prestige automobile with a distinctly French touch, free from passing trends. Measuring 4.50 m in length, with extremely short front and rear overhangs, the design is both sleek and dynamic, with aerodynamic efficiency a clear priority. The smooth, no-frills design combined with distinct features such as the double-bubble roof and the aerated rear posts, ensure the Furtive-eGT stands out from the crowd.

A sporty and versatile GT car 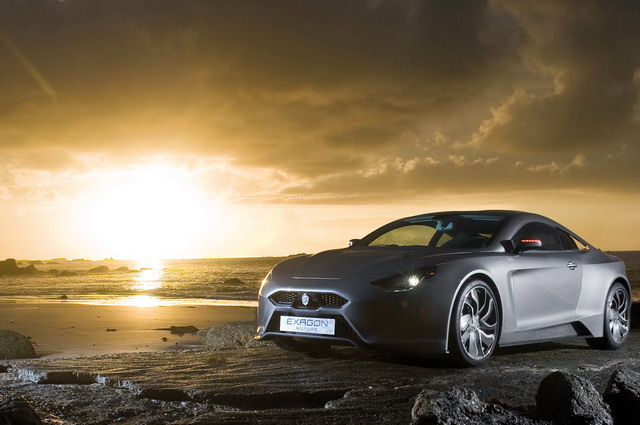 The Furtive-eGT may have fully embraced the digital age of the automobile, but it has not lost touch with its roots in the distinguished history of top-of-the-range GT cars. It is a long-distance traveller, a genuine 2+2 which can easily fit 4 passengers and their luggage in its leather interior. The Furtive-eGT has been designed with versatility in mind; it combines the behaviour and performance of a leading sports car with the comfort of an executive car.

Two of the most compact electric motors available on the market, courtesy of Siemens Corporate Technology

The Furtive-eGT is powered by two latest-generation motors created by Siemens Corporate Technology, each providing an output of 125 kW, i.e. total power equivalent to 340 hp at 5,000 to 10,000 rpm. These are currently the lightest and most compact engines available on the market. They have a liquid cooling system and their efficiency is outstanding.

The lithium-ion batteries manufactured by worldwide specialist Saft are the beating heart of the Furtive-eGT. These state-of-the-art VL 4 batteries provide 150 kWh. They have a life cycle of approximately ten years, can undergo 3,000 charging cycles and are recyclable. Their autonomy is astounding: 197 to 402 km in electric-only mode, depending on usage conditions. An optional range extender brings the autonomy up to 807 km.

A strong command of autonomy

The Furtive-eGT is the first ever electric GT to guarantee several average autonomies in all-electric mode, calculated according to European standards and energy use cycles.

Autonomy in 100 % electric mode (without the range extender)

Autonomy of 807 km with the range extender (OPTION)

The Furtive-eGT is fitted with a range extender: a small combustion engine with a low cylinder capacity which charges the batteries when they have reached the limit of their autonomy. This engine has no effect on the wheels; it simply acts as a generator. It therefore has very low fuel consumption and it functions at a constant rate, ensuring optimum fuel consumption. The range extender brings the Furtive-eGT’s total autonomy to 807 km with 25 l of fuel under the ECE15 standard cycle, or 734 km with 25 l of fuel under the standard mixed cycle.