Porsche launches a new variant of the celebrated and successful racing pedigree 911 GT3 RS this July, offering even more power and greater performance.  Limited to 600 vehicles worldwide, the 911 GT3 RS 4.0 takes all the attributes that have made the Porsche 911 GT3 a serial winner on the race track and moves the GT3 road car programme to a new, higher level.

The new model transmits thoroughbred motorsport technology through to its innermost core. The flat engine crankshaft has been lifted unchanged from the 911 GT3 RSR racing car s six cylinder engine and the forged pistons connecting rods are made of titanium.

The flat six 4.0-litre sports engine, the biggest 911 engine ever, is also the most powerful naturally aspirated engine with 125 hp/litre. It achieves its maximum power of 500 hp at 8,250 revs per minute and delivers its maximum torque of 460 Nm at 5,750 rpm. 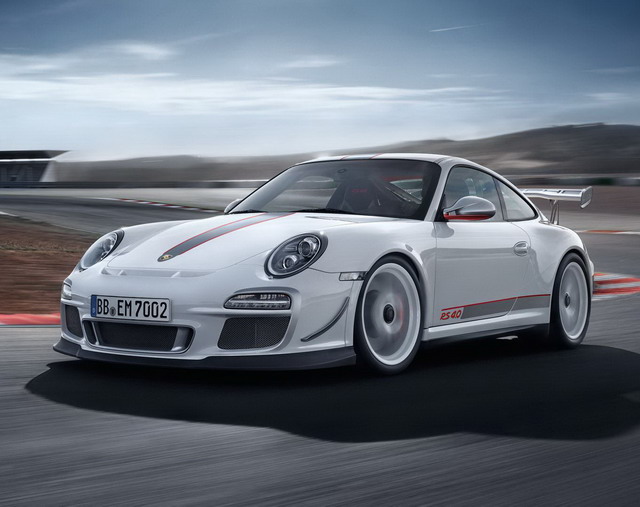 This impressive performance continues on track, this limited edition model achieves a Nürburgring-Nordschleife lap time of 7:27 minutes. The 911 GT3 4.0, available exclusively with a six-speed manual sports transmission, sprints to 62 mph from a standing start in 3.9 seconds and, with its gearing designed for the racing circuit, takes it to the 124 mph (200 km/h) mark in under 12 seconds.

The driving dynamics of the 911 GT3 RS 4.0 are the result of meticulously coordinated details.  In order to best exploit the increased power, the chassis settings of the new car have been revised. This includes the set-up of the Porsche Active Suspension Management (PASM), an electronic damper adjustment system that actively and continuously controls the individual damping forces for each wheel and the rear axle now features additional ball-joints for greater adaptability.

In addition to using the suspension components typically encountered in motor racing, weight reduction is also of supreme importance. Equipped as standard with light weight components such as bucket seats, bonnet and front wings made of carbon fibre, plastic rear windows and weight-optimised carpets, the two-seater s ready-for-road weight is just 1,360 kg, delivering a power-to-weight ratio of 368 hp/tonne. 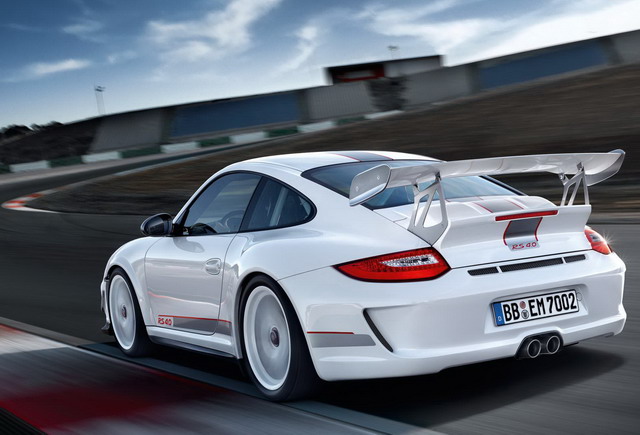 The limited edition 911 is painted Carrara White as standard and emphasises its proximity to motor racing by its dynamic appearance. Trademark characteristics are the wide track, the low ride height, the large rear wing with adapted side plates, the typical central twin tailpipe and the aerodynamically optimised body.  The lateral front air deflection vanes, so-called flics, making their first appearance on a production Porsche, testify to the aerodynamic precision engineering. They create increased downforce on the front axle and, together with the steeply inclined rear wing, bring the vehicle into aerodynamic equilibrium.  As a result, aerodynamic forces exert an additional 190kg at top speed, pushing the 911 GT3 RS 4.0 onto the road.

Inside, the 911 GT3 RS 4.0 features lightweight sports bucket seats in carbon fibre covered in black leather/red Alcantara with RS 4.0 in red on the headrests. The steering wheel and gear shift lever are also trimmed in Alcantara with red stitching. Carbon fibre door entry guards with RS 4.0 logos are fitted to each sill and a dashboard trim strip in carbon fibre with a RS 4.0 logo runs across the inside of the car above the glovebox lid. As is characteristic of the 911 GT3 RS, the Clubsport package – comprising half roll cage, seat belt harnesses, fire extinguisher, battery cut-off switch - is a standard feature of the 4.0 model. 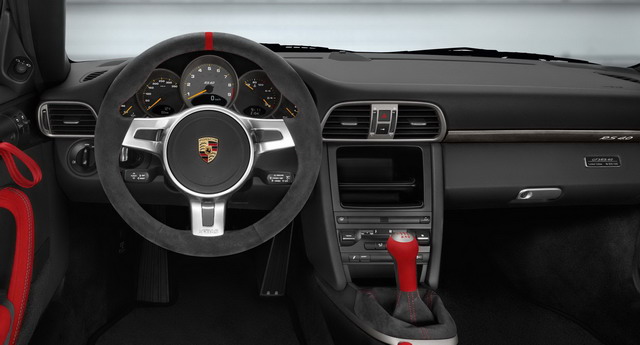