“Force 1 is another dramatic example of what we are going to do at VLF Automotive by combining proven world-class platforms and components with elegant designs to produce stunning bespoke luxury sports vehicles” said Bob Lutz,VLF Automotive Chairman.Fisker and Keating entered partnership discussions in early 2015 after bonding over their mutual love of cars, fondness for each other’s professional work and the possibilities that could emerge if their skill sets intersected.

“What inspired me most about building this partnership with Ben is that he is the most passionate Viper racer in the world and understands performance metrics in cars, both on the track and on the road, better than anyone I’ve ever met,” said Fisker. “He’s developed a unique active suspension for superior handling and ride, which is seamlessly integrated into the Force 1, enhancing performance whether on track or road.” 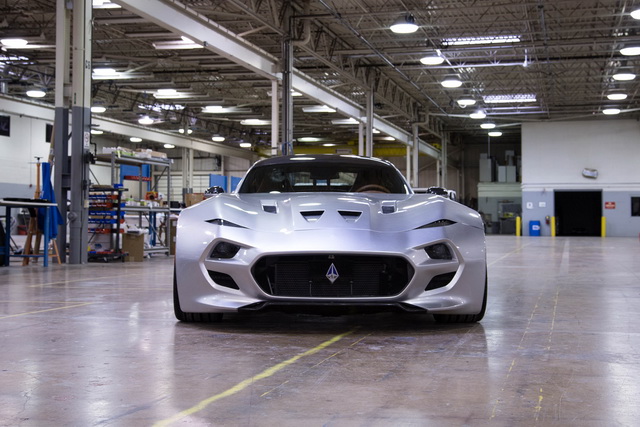 “To work with Henrik as one of the world's best designers to create a super exciting, wide curvy body for this amazing car is the opportunity of a lifetime,” Keating said. “Plus, it’s the perfect vehicle to showcase many of the incredible performance features we've been working on for years. It really is the chance to start with an amazing initial platform to develop an incredible American super car with exceptional design and performance.”

Force 1 V10 features an all carbon fiber, lightweight body and 21-inch wheels with highperformance Pirelli P Zero tires and Brembo high-performance brakes. The car has one of the most powerful naturally aspirated road engines in the world delivering the best performance in its price class.

“In the case of Force 1, there is an extremely pushed back green house,” Fisker explained. “The sculpture on Force 1 is like a family succession to Destino, dramatic and powerful, relative flat surfaces on the high end of the body side, with lines full of tension, emerging onto a rounder lower section, where Force 1 has a large functional outlet. The sculptural hood has unique, large, negative surfaces, as in the family of the Destino, with six highly needed air intakes and outlets for the 745-HP 8.4 L V10 engine. The windscreen wraps around into the side glass, followed by an elegant, yet aggressive side line sweeping up towards the rear deck. The graphics are uniquely sleek with ultra-thin lights in front and UTV laser-blade tail lamps, the thinnest tail lamps in the world, at the rear. The day light opening (DLO), or side window, has a completely new and never before seen graffic that ends up in a sharp spear.”

Force 1 incorporates downforce elements such as the deep front spoiler and aggressive rear diffusor in pure visible carbon fiber. At the top of the rear glass sits a unique rear wing spoiler also housing the in car Wi-Fi and third brake light. Both the front and rear signature Henrik Fisker wheels have a concave section design to improve strength of the wheel, requiring less mass. The 21-inch aluminum wheels with wide high-performance Pirelli tires sits in lean, sculptured, pronounced wheel arches. The front features an aggressive grille housing the VLF logo in the center and two ultra-slim lights sitting above the grille. The interior is luxurious, with hand stitched ultra-soft leather, Alcantara, suede with several other unique features, such as a champagne holder. 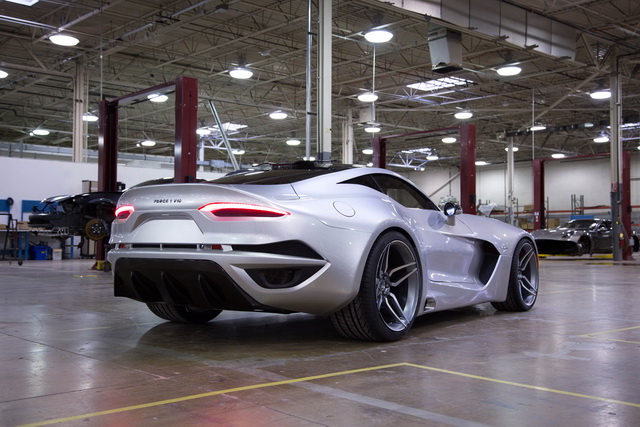 Production commences at the end of April 2016 in Auburn Hills and deliveries begin in third quarter 2016, with the base price starting at $268,500. Force 1 V10 will be produced in limited numbers with an initial production of only 50 units and available through Ben Keating’s Viper Exchange. Besides owning a limited edition all-American, highperformance luxury sports car, Force1 V10 owners will have the unique opportunity to attend two racing events per year with Ben Keating as an integral part of the team, in the paddock and in the pits where all the action takes place. This is an exclusive, all-access pass into the drama and excitement of sport car racing in a way found nowhere else. 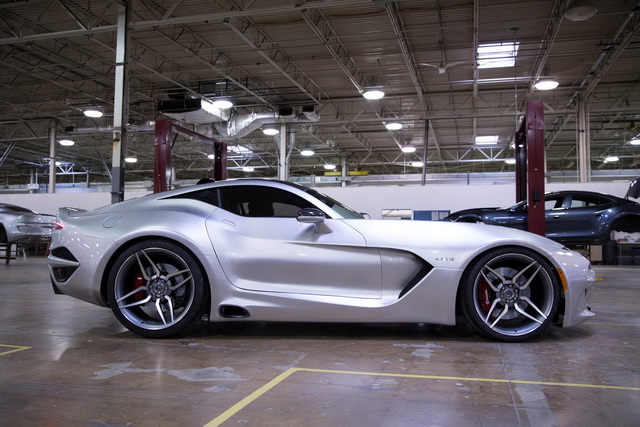 Ben Keating is a consummate car guy, businessman, racer, team owner and a car collector. He bought his own small dealership in 2002 and during the past 14 years, he and his team have purchased 15 dealerships representing 15 different brands. Retailing 25,000 vehicles in Texas in 2015, most sales have been trucks and SUVs, but Keating also loves sports cars and sports car racing. Through his website ViperExchange.com, he has been the #1 volume Viper dealer in the world for the past six years. He was a Viper racer before he was a Viper retailer, and has proven that "Win on Sunday, Sell on Monday" is still very true today. Keating was a multiple National Champion in the Dodge Viper Cup before teaming up with Bill Riley and Riley Motorsports to be the only American sports car to compete in the GTD class of the Tudor United Sportscar Championship. With six wins and multiple podiums for the Viper GT3-R over the last two years, including the 2015 Rolex 24 at Daytona, Keating is one of the most successful Viper racers in history. Keating and Riley brought home the Patron North American Endurance Championship in 2015, and also took a Viper GTSR to France to compete in the iconic 24 Hours of Le Mans, earning the fastest lap of the race for the GT-Am field. In addition to racing, Keating is also the world’s largest volume Viper retailer, which gives him the opportunity to explore many opportunities to bring his racing knowledge to street car performance.

Henrik Fisker is an entrepreneur and one of the world’s leading automotive designers. Fisker is a founding partner at VLF Automotive and head of design and product strategy. Fisker is also Founder and CEO of HF Design, a Los Angeles based innovation and industrial design house that works across numerous categories including luxury travel, automotive, architectural design, furniture, smart devices, consumer products and technology. Previously Fisker founded Fisker Automotive in 2007, where he launched the world’s first premium plug-in hybrid, Fisker Karma. Best known among his creations are BMW Z8, Aston Martin DB9 and Aston Martin V8 Vantage. Among his latest creations is the Viking motorcycle, Rocket, Destino and Force 1. More information can be found at www.henrikfisker.org

VLF Automotive is an American luxury sports car company founded in 2015 by former General Motors Vice Chairman Bob Lutz, manufacturer Gilbert Villarreal and entrepreneur and designer Henrik Fisker. VLF Automotive has a state-of-the-art development and manufacturing facility in Auburn Hills and a design and technology center in Los Angeles. With Lutz as chairman, Villarreal as CEO and Fisker as head of design and product strategy, the team represent more than 100 years experience in the automotive industry and has been instrumental in creating iconic cars such as BMWs, Vipers, Aston Martin’s, Corvettes and Fisker. VLF Automotive will remain a low volume manufacturer of luxury and sporty automobiles, bringing together true American luxury and performance with reliability for everyday enjoyment. VLF Automotive has announced the production of 2 models in 2016: Destino V8 and Force 1 V10. The company is expected to have seven dedicated dealers with full service capability, throughout North America, and several international dealers appointed in 2016. More information can be found at www.vlfautomotive.com