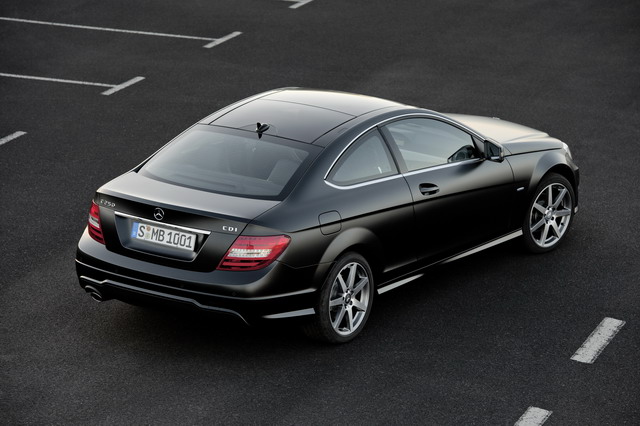 What more dynamic way to celebrate the invention of the automobile? The expressive C-Class Coupé sees Mercedes-Benz, now in its 125th year of corporate history, entering a new market segment and for the first time offering a compact, classic coupé. This youthful, sporty two-door car will be unveiled at the Geneva Motor Show in early March and making its way to customers from June.

The new model deploys the progressive technology featured on the recently launched new generation of the C-Class to deliver an impressive coupé format that combines pure fun at the wheel with exemplary efficiency. In terms of attitude, this debuting model is tailored to a customer group aged 35 to 45 for whom professional success, love of life and a strong sense of responsibility are all important.

"By extending the C-Class portfolio, we are consciously targeting new customers," says Dr Joachim Schmidt, Head of Sales and Marketing at Mercedes-Benz Cars.

"The new model is youthful, stylish and dynamic. What we are offering is an exceptionally sporty way to enter the world of the Mercedes-Benz coupé."

From the side, the new coupé beguiles the onlooker with its compact proportions, low silhouette (41 mm flatter than the saloon) with powerful shoulders and a narrow C-pillar in a classic three-box design. Typical coupé features include the short front overhang, long bonnet, steeply raked windscreen and long, stretched out roof. The greenhouse extends far beyond the rear axle over the rear window in its flat position to a sportily short tail end.

While the wedge-shaped, sloping beltline demonstrates affinity with the C-Class, its strong upsweep into the C-pillar is an entirely distinctive element. The final part of the beltline trim moves sharply upwards to meet the roofline trim. This upsweep not only adds a sporty flourish to the way the side windows look; the shaping at the bottom of the C-pillar also enhances the powerful shoulders.

At the front, the new coupé shares the same styling as the latest C-Class and yet still has its own twist. The front view is dominated by the prominent radiator grille surround including the bumper. The centre air intake opens upwards, forming a visual base unit for the radiator grille which has the double-louvre style typical of a coupé. Two chrome louvres extend left and right either side of the central star, tapering off at the outer edges and creating a sporty, arrow-shaped horizontal sweep which gives the front end a pronounced V-shape.

This continues into the side sections which extend from beneath the headlamps and blend into the feature lines along the vehicle flanks, thereby linking the front end with the sides. The side air intakes in the bumper featuring integrated, horizontal daytime running lamps are positioned low down, giving the coupé a road-hugging appearance. The shape of the clear-lens headlamps creates a dynamic impression, and acts together with the bonnet, radiator grille and bumper trim to reinforce the pronounced front section.

From the rear, the new C-Class Coupé looks sportily short. Because the roof flows beyond the rear axle with the steeply raked rear window and fluid C-pillars, the appearance of length is reduced. A wide chamfer at the top of the boot lid, which is based on the side panel, highlights the rear's compactness. Positioning the tail lights as far apart as possible emphasises width. The particular impression of depth is achieved by a centrally located LED indicator, which appears to float in front of the red upper and lower light bands with their more deeply set LEDs. Continuous, horizontal light-catching contours in the bumper further accentuate the broad, deep-set effect. A diffuser towards the bottom of the rear bumper between the exhaust system's tailpipe trim makes the rear end look lighter and gives the
vehicle a distinctively sporty and dynamic quality.

The dashboard instrument panel features a strong, sporty and high-quality design. Three tube rings with a galvanised finish demonstrate the car's sporty credentials to the driver. As standard, the coupé comes with the new generation of three-spoke steering wheel with its chromed central spoke that first appeared on the new CLS. The touch surfaces of the controls are finely detailed and galvanised. The stepped top of the instrument cluster also accommodates the central display and continues onto the front passenger side as a discreet light-catching contour. The central, trapezoidal air vents and the round vents on the outside are highlighted in detail by galvanised trim. The control panel of the new-generation communication and information unit has silver-coloured keys. The combination of matt keys, high-gloss areas and a new thumbwheel design underlines the high perceived value of the interior.

A large section of trim is a high-quality part of the dashboard instrument panel. This extends from the centre air vents across the front passenger side to the outer air vent, emphasising the interior's generous proportions. For the first time in automotive engineering, the trim parts are available in the style package and in a porcelain piano-lacquer look for the Edition 1 to complement the car's exclusive interior feel. Alternatively there is a choice of a black piano-lacquer look, nougatine burr walnut wood, dark aluminium or brown ash burl.

The C-Class Coupé is a fully fledged four-seater featuring four sporty, comfortable integral seats. If desired, the backrests in the rear can be folded down to make the boot larger. 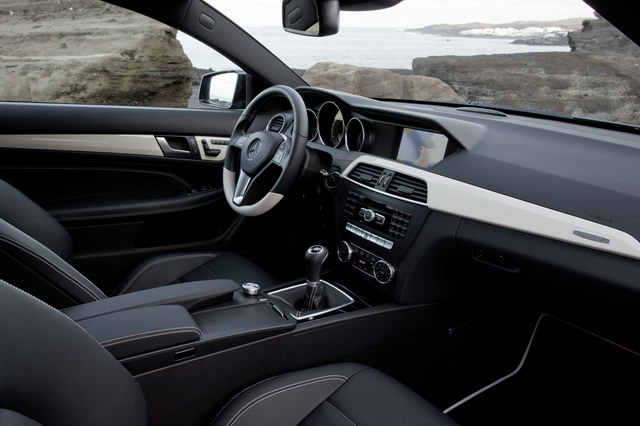 The multimedia system COMAND Online now provides internet access for the first time. When the car is stationary, customers are able to browse freely or surf to a Mercedes-Benz Online service whose pages load particularly rapidly and are also easy to use while on the move. The integrated services include weather information and a special destination search via Google, as well as the option of downloading a route that has been previously configured on a PC using Google Maps and sent to the car. The navigation system of COMAND Online also has added functions. New features include a 3D display with plastic city views Also new: routes covered can be recorded and repeated later, specific personal destinations can be saved or imported via an SD card and four alternative routes can be displayed on the navigation map, one of them a particularly economical variation.

The Becker® MAP PILOT makes a low-cost navigation function, which can also
be retrofitted, available for the entry-level Audio 20 CD radio. Its advantages over aftermarket solutions include integrated operation via the central controls and the Audio 20 display, a concealed location in the glove compartment and updating via an internet portal. 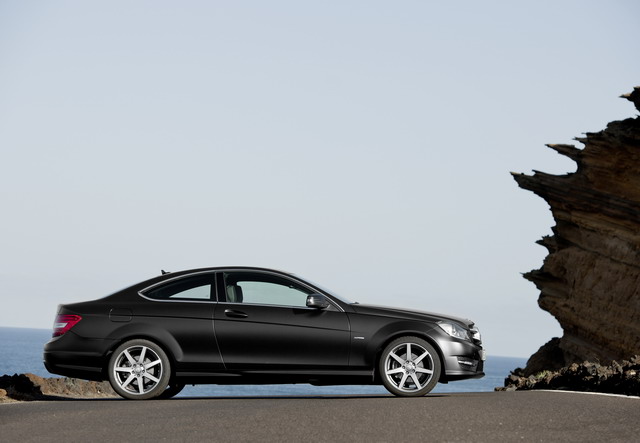 There is a choice of three petrol engines and two diesel powerplants to power the C-Class Coupé. All are equipped with direct injection and the ECO start/stop function as standard. All the engine variants are classed as BlueEFFICIENCY units, showing that they are particularly efficient and environmentally friendly
in their use of fuel. All automatic versions feature the further-enhanced 7G?TRONIC PLUS seven-speed automatic transmission (standard with the C 250 and C 350 petrol engines). The C 220 CDI and C 250 CDI diesel variants and the basic C 180 petrol engine come with a six-speed manual transmission as standard.

The top engine variant is the V6 petrol engine in the C 350 BlueEFFICIENCY featuring the efficient BlueDIRECT method of injection. It delivers 225 kW (306 hp) and 370 Nm. Average fuel consumption is 6.8 litres per 100 km. The four-cylinder petrol engines have direct injection and are turbocharged, offering high performance and exemplary economy.

The most economical coupé model is the C 220 CDI BlueEFFICIENCY with manual six-speed transmission and the standard ECO start/stop function. It has an average diesel consumption of 4.4 litres per 100 km. This corresponds to 117 grams of CO2 per kilometre. The C 250 CDI BlueEFFICIENCY contents itself with a combined diesel consumption of just 4.9 litres per 100 km. This corresponds to CO2 emissions of 128 grams per kilometre.

Chassis: agile handling and a high level of comfort

The AGILITY CONTROL suspension, which is standard equipment, complements the dynamic engines to perfection. This is based on an amplitude-dependent damping system: when driving normally with low shock absorber impulses, the damping forces are automatically reduced for a noticeable improvement in road roar and tyre vibration characteristics – but without any compromise in handling safety. When shock absorber impulses are greater, for example when cornering at speed or performing evasive manoeuvres, the maximum damping forces are set and the car is effectively stabilised. The AGILITY CONTROL suspension is complemented by a rack-and-pinion steering system. Speed-sensitive steering with variable centring and a constant steering ratio is available as an option.

The front axle has a three-link construction with McPherson spring struts. The lower control arm consists of two separate elements which serve as torque and cross struts and are both made of aluminium. The third link in the front suspension is the tie rod which connects the transverse steering gear to the wheels. The reinforced anti-roll bar is connected to the spring strut which is likewise actively involved in directing the front wheels.

With multi-link independent rear suspension, the wheel is attached to five flexibly mounted, independently acting control arms which restrict five of the available spatial movements: owing to this intelligent control arm construction, each rear wheel basically retains freedom of movement in one plane only, namely during controlled compression and rebound.

In addition to AGILITY CONTROL suspension as standard, there is an optional extra on the coupé in the form of a 15 mm lower sports suspension with harder, shorter springs, tauter shock absorbers and stronger torsion bars. Speed-sensitive sports steering is also included.

With seven airbags as standard, belt tensioners and belt-force limiters for all seats, the C-Class Coupé has extensive safety features. The airbags, which can deploy in milliseconds in the event of an accident, include front airbags and sidebags for the driver and front passenger, a kneebag on the driver's side, and headbags. The side protection system – comprising headbag and thoraxbag – optimises the level of protection afforded to individual parts of the body. To protect pedestrians, the coupé has an active bonnet made of aluminium.

With a number of driving assistance systems ranging from ATTENTION ASSIST drowsiness detection to DISTRONIC PLUS proximity control, the coupé provides a comprehensive level of driver support and protection. The assistance systems are based on the latest radar, camera and sensor technology, and cover frequent accident causes such as driving too closely, fatigue and darkness.

Assistance systems – some of which only give a warning in hazardous situations, and some which actively intervene – at a glance:

The market launch of the C-Class Coupé commences in June 2011.