Anybody who was once able to drive a Ford Mustang Shelby GT 500, knows of what earthy power outbreaks the current generation of this automobile legend is capable of even when it operates with factory settings: smoking rear tyres are not a problem even in higher gears and, once incited, the GT500 becomes a wild animal. Logically, it has its radiator grill with very good reason: the cobra with a widened sign on the neck stands for pure aggressiveness. 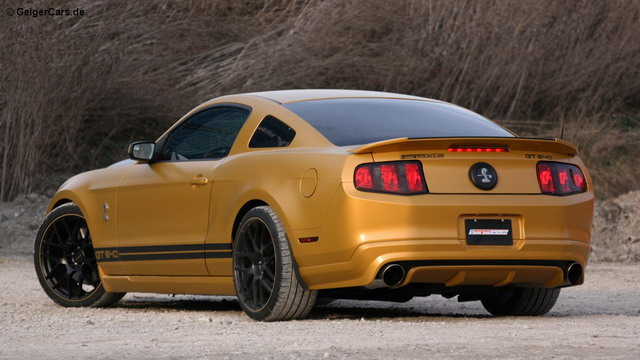 Based on this power vehicle, US car specialist GeigerCars.de from Munich now placed the company s youngest show car on its wheels: the Ford Mustang Shelby GT640 Golden Snake. The name absolutely reflects the mission of the company!

The 5.4 litre V8 has been prescribed a large 2.3 litre compressor as well as a Geiger stainless steel sport exhaust system, so that the eightpointer - after a mandatory software adaptation - sends now a wailing, whopping 640 PS (series: 548 PS) to the back wheels. The mechanically loaded engine produces 789 Nm on the crankshaft at the highest point of the torque. After picking up strength, the Mustang catapults itself in only 3.7 seconds to 100 km/h and reaches a top speed of 295 km/h.

A novelty in the Mustang history is the material of the engine block. This consists from the model year 2011 (series) namely of aluminium, which significantly reduces the load on the front axle and, thus, gives the Power Coupe a significantly better position on the road. 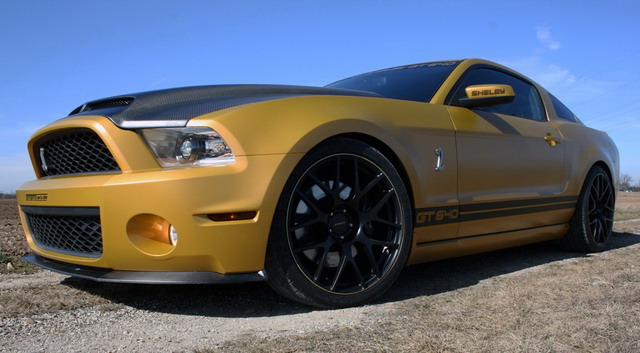 Equally conducive to the increased efficiency – even though it might sound baffling at first – is the carbon engine bonnet. An intake air channel was skilfully integrated into the engine bonnet, so that the airflow will be optimally introduced to the combustion chambers. The front spoiler lip also consists of the typically shimmering carbon fibre, while the remaining body – nomen est omen – was painted in dead gold, which lights up fascinatingly especially when the sun is low in the sky. This is contrasted by the matt black Geiger rims with ring accentuation in the colour of the vehicle, which are used in the sizes 8.5x20 inch front and 10x20 inch rear. These have been fitted with super Michelin Pilot sports tyres with the dimensions 255/35ZR20 and 285/30ZR20. An adjustable sports chassis from H&R provides for optimal ground grip of the handy tyres. In addition, the Mustang was equipped with a high-quality sound system with EU navigation. 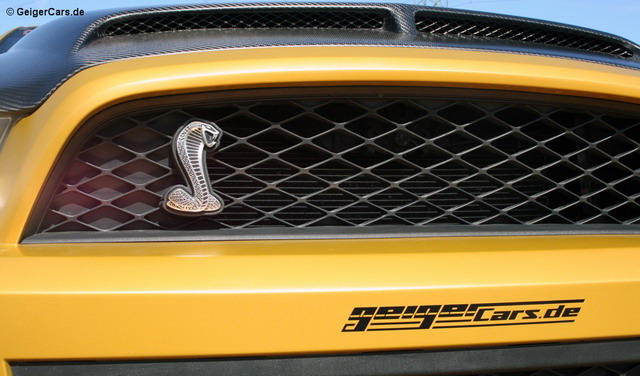