The official debut of the Vanquish came just days after its ‘sneak preview’ at the Goodwood Festival of Speed, where eagle-eyed sports car connoisseurs will have glimpsed the new V12 coupe completing a handful of suitably swift runs up the famous Goodwood hill. 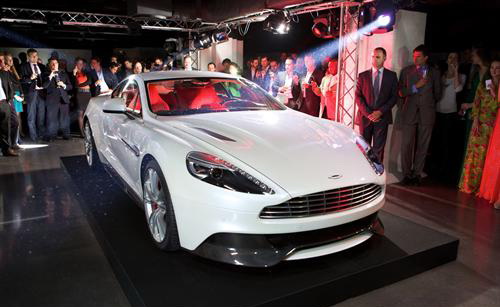 Vanquish is a new Aston Martin featuring the next generation of the VH architecture as well as a significantly upgraded 6.0-litre V12 engine boasting 573 PS and 620 Nm of torque. Capable of a 0-62 mph time of 4.1 seconds and a top speed of 183 mph, the Vanquish claims a place firmly in supercar territory.

As with all modern Aston Martin sports cars, the Vanquish has been designed and will be hand-built at the company’sglobal headquarters at Gaydon in Warwickshire.

It will be available as a 2+2 or 2+0 with the first privileged owners taking delivery of their cars before the end of the year.

“As Aston Martin is in its 100th year and prepares for the 100th birthday of the brand in January next year, the debut of this new super grand tourer means we can look forward to the next century with confidence and real excitement.”

He added: “I’m very proud of the new Vanquish, and my team that have worked tirelessly to perfect it, and I’m convinced that it will quickly become one of the most sought-after and admired cars on the road.”

Priced from £189,995 RRP in the UK, first deliveries of the new sports car are expected to begin in the UK and Continental Europe late in 2012.