The Dodge Stealth is an impressive automobile which boasts sleek styling and brandishes an aggressive shape. These cars incorporate some of the latest automotive technology available today which is put to good use when demonstrating its performance potential. Although often compared to sports cars, the Dodge Stealth is a grand touring 2+2 seater sport coupe which has but one drawback: a weight disadvantage. This, of course, is more than compensated for with ample acceleration and braking power. Built in Nagoya, Japan by Mitsubishi Motors Corporation, the Dodge Stealth is the twin to the Mitsubishi GTO or 3000GT as commonly known in the United States. Although most of the Stealth was designed and built by Mitsubishi, the body styling is unique to the Stealth and was designed by Dodge. The Dodge Stealth is available in Canada and the United States, whereas the Mitsubishi GTO or 3000GT is not available in Canada but is available in the United States and abroad. In 1991, its first year of production, the Dodge Stealth was available in four trim levels: base, ES, R/T and R/T Twin Turbo. It was initially released with these various configurations to satisfy the individual tastes and budgets of a wide range of sports car enthusiasts. The base Stealth powertrain, which was available until 1995, is a 3.0-liter, SOHC, 12-valve V6 that produces 164 horsepower at 5,500 rpm. The Stealth ES, which was available until 1993, and the R/T increases that level of performance with a 3.0-liter, DOHC, 24-valve V6 that delivers 222 horsepower at 6,000 rpm. A 3.0-liter DOHC twin turbocharged V6 with 320 horsepower (300 horsepower for 1991-1993 models) does 0-60 mph in a very impressive 5.3 seconds. The Stealth R/T Turbo model is equipped with a 6-speed Getrag manual transmission (5-speed Getrag pre-1994). All other models come standard with a 5-speed manual transmission. Available as an option in all models except the Stealth R/T Turbo is a 4-speed automatic transmission which features driver controllable Power/Economy modes. Safety features include the availability of anti-lock brakes as either standard or optional equipment across the entire Dodge Stealth lineup. The Stealth includes standard driver-side air bags in all models made to date and passenger-side airbags in all models produced after 1993. The Dodge Stealth's comfort and convenience features include standard air conditioning (switched to R-134a in 1994), an available tailgate wiper/washer, power windows and door locks, speed control, a security alarm, and a remote keyless entry system which became available in 1993. Front low-back bucket seats with recliners and height adjustment are standard on all Stealth models. Leather seats are optional on R/T and R/T Turbo models. The Stealth R/T Turbo is the most often talked about model in the media. With an impressive list of standard equipment and features, it's quite easy to see why. Over various production years, this model is or has been a twin turbo charged, twin intercooled, all-wheel driven, four-wheel steered assembly of metals, plastics and leather with triple mode electronically controlled supension and dual mode active exhaust. Depending upon year, it pumps out between 300-320 horsepower with between 307-315 lb-ft of torque and there is still room for the kids! In late 1995, it was announced that the Dodge Stealth would no longer be produced after 1996 due to the rising value of the yen and slow sales. A 1996 model was not available in Canada and production was very limited in the United States. All told, this car is destined to become a collector's item for automotive enthusiasts. 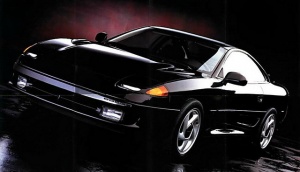