The Mitsubishi 3000GT is a high tech, high performance grand touring, 2+2 seater sports coupe which was built to compete with cars in the luxury sport class such as the Acura NSX, Chevrolet Corvette, Mazda RX-7, Nissan 300ZX and the Toyota Supra. Although the 3000GT VR-4 twin turbocharged model is often thrown into the mix of shoot-outs with such cars as the Ferrari 348 and the Porsche Carrera 4, the 3000GT often comes up short in certain categories due to its nearly 3800 lb. overall weight . This may seem to be a problem to some but the Mitsubishi 3000GT is quite agile at normal speeds and rock solid in sustained high speed driving situations; something the others are not quite prepared for. Built in Nagoya, Japan by Mitsubishi Motors Corporation, the 3000GT is known in Japan and abroad as the Mitsubishi GTO. It's twin brother, the Dodge Stealth is identical in every aspect except for its exterior styling and available options. The Mitsubishi 3000GT is not available in Canada but is available in the United States and abroad. The Mitsubishi 3000GT was first made publicly available in 1991 and featured three trim levels; the base model, SL and VR-4. Although the base and SL models are very similar, the SL includes more standard features and available options. The VR-4, on the other hand, has standard options which are not available in the other models. The Mitsubishi base and SL models feature a 3.0 liter DOHC 24-valve V6 engine which produces 218 horsepower. The VR-4 features a 3.0 liter DOHC 24-valve twin turbo charged V6 engine which produces and incredible 320 horsepower and does 0-60 mph in a very impressive 5.3 seconds. Saftey features which are standard in all 3000GT models includes a driver side airbag, three-point seat belts in all four seating positions and side-guard door beams in later models. A passenger side airbag was also added as a standard option in 1994. Anti-lock brakes are also available in most models. The 3000GT VR-4 model is equipped with a 6-speed Getrag manual transmission (5-speed Getrag pre-1994). All 3000GT base and SL models come standard with a 5-speed manual transmission. Available as an option in all models except the 3000GT VR-4 is a 4-speed automatic transmission which features driver controllable Power/Economy modes. The Mitsubishi 3000GT's comfort and convenience features include standard air conditioning (switched to R-134a in 1994), an available tailgate wiper/washer, power windows and door locks, speed control, a security alarm, and a remote keyless entry system which became available in 1993. Front low-back bucket seats with recliners and height adjustment are standard on all 3000GT models. Leather seats are standard in the SL and VR-4 but are not available in the base model. Although three distinct 3000GT models are produced, the top-of-the-line model is the most often talked about. The Mitshubishi 3000GT VR-4 is a very impressive car which features a twin turbo charged, twin intercooled engine. Standard features also includes all-wheel drive, four-wheel steering and Active Aero (the ability to adjust front air dam and rear wing positions depend upon speed). Available in earlier models was triple mode electronically controlled supension and dual mode active exhaust. Current 3000GT VR-4's pump out 320 horsepower with 315 lb-ft of torque. Pre-1994 3000GT VR-4's produce 300 horsepower with 307 lb-ft of torque. With a truly high tech automobile like the 3000GT, what lies ahead in the future of the 3000GT? That can only be answered by what is in the research and development labs of Mitsubishi Motors Corporation. It will be interesting to find out. 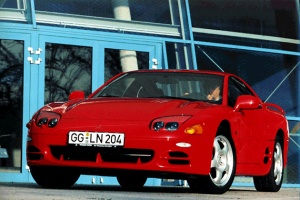 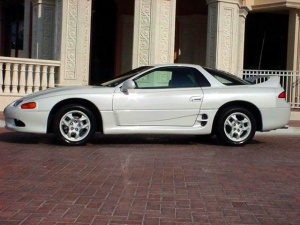 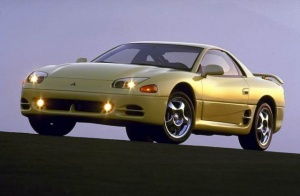 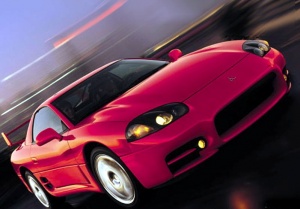