DKW cars in the 1950s were all based on characteristic 2-stroke engines which were gradually becoming obsolete and an aerodynamic body shell developed just before the War. Marketing these cars became more and more difficult and DKW desperately needed an image boost. And so director William Werner, of US American origins, ordered his stylists one day in 1956 to design "a sportscar that has to look like a bomb". The stylists decided to check out what was on the market and ultimately came up with the 1000Sp; a German interpretation of the 1957 Ford Thunderbird with a non-removable coupe top not unlike that of the one-off 1956 Ford Thunderbird "Five-Window Hardtop" prototype. The Auto Union 1000Sp was unveiled at the 1957 Frankfurt Motor Show and was met with admiration and praise by public and press. The car was designed by chief stylist Josef Dienst. Its model name stood for the (nearly) 1000 cc engine and the "Special" bodywork. Underneath its fancy shell operated familiar DKW technology taken from the regular Auto Union 1000 model. The first series of 1000Sp models was produced from 1958 to 1961 and was distinctive by the pointy tailfins like you see on the picture above. The second series, which ran from 1961 till 1965, had rounded-off tailfins like on the blue car shown here. The bodywork of all 1000Sp models was produced by Baur in Stuttgart. The cars were assembled in the DKW factory in Ingolstadt. The 1000Sp was a relatively small car, it measured 418 x 169 x 132 cm (length x width x height). Because of that its weight was limited to only 980 kg. This way its 981 cc 3-cylinder 2-stroke engine of 55 hp @ 4500 rpm, which drove the front wheels, managed to pull it from 0 to 100 kph in 23 seconds and to a maximum speed of 140 kph. By no means a blistering pace but quite sufficient for that time. The 1000Sp looked enticing and had an acceptable performance, but it didn't sell very well. From 1958 till its end 1965 only 5000 of these cars left the factory. For an important part this had to do with its price, which was about 50% more than its regular bodied but similarly powered model 1000 brother, and even twice as much as a contemporary Volkswagen Beetle for instance. Even a Volkswagen Karmann-Ghia coupe, its most direct but much slower competitor, was considerably cheaper. So though enough people lusted after the car, most of them simply couldn't afford it. And those who could opted for a more modern 4-stroke engined car, of which were plenty available in this price range. www.ritzsite.net/ DKW1000SP/01_SP.htm 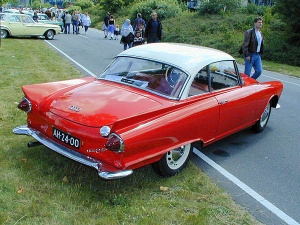 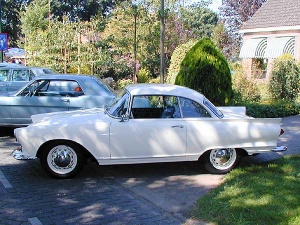 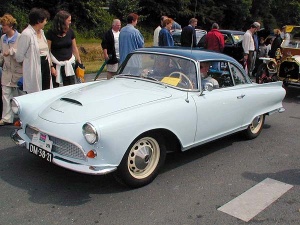 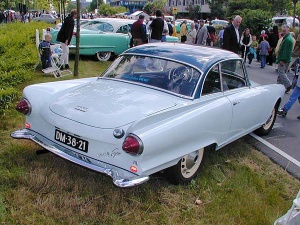 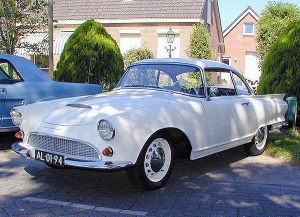