The first production road car from De Tomaso, the Vallelunga was a mid-engined (using a Ford 1500cc unit) two seater with a backbone chassis and a lightweight fibreglass bodyshell. First shown as a spider at the Turin Motorshow of 1963, this remained a one-off (although competing successfully in various races), whilst in 1964 at the same show the Vallelunga Coupé was shown. The weight saving of the producution cars continued with perspex windows and an aluminium fuel tank etc. The suspension consisted on double wishbones at the front and an independent multi-link layout at the rear. Rose-joints were used throughout. Unassisted disc brakes (assistance was optional) on all four corners provide the stopping power, more than adequate for a car which weighed 700kg (47% front/53% rear) in road trim. A total of 53 coupés were produced from 1965 to 1967 by Ghia, although the original prototype had been built by Fissore. One variant was built by Fantuzzi, whilst de Tomaso joined with Ghia to produce the radical 5-litre Sport on the basis of the Vallelunga. 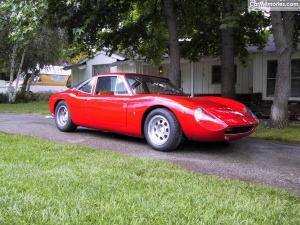 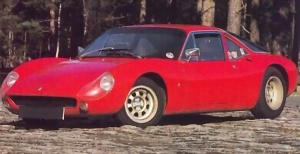