In 1984 Ferrari produced a street-legal car that paradoxically and magically combined the most sublime beauty with a very raw level of performance. Developed beside the Testarossa, the car also bore a name writ large in Ferrari history: GTO - Gran Turismo Omologata. The 1962-64 250 GTO is perhaps the most desired of all Ferraris, and amongst the rarest. It was a notably successful racing car, homologated for GT sports car racing in the golden era. The 1984 GTO was a 2.8 liter twin turbocharged V8 with a power output of 400bhp (140bhp / liter) enough to reach 60mph in 5s or less, and with a conservatively rated top speed of 189mph. Like its forebear, the GTO's real home was to be the public roads designated as FISA Group B racing tracks, for which series it was necessary to homologate 200 customer cars. In fact Ferrari built 272 modern GTOs, and because of the demise of the no-holds barred Group B supercar series almost all became road cars. With their blend of serene control and dynamic violence they have been called the most exciting automobiles ever created. It is worth noting that no GTOs were imported into North America by Ferrari, and prospective buyers should therefore purchase through an authorized Ferrari dealer to ensure the car is correctly Federalized. Design The GTO's styling is at first glance an evolution of Pininfarina's twin 1970s mid-engined masterworks: the Berlinetta Boxer and the 308. It was in fact a very different car, sharing not even the respective dimensions of these pure street machines. Most notably it was shorter, with a longer wheelbase, and considerably wider - the traits of a racing car. Visually similar to the 308, the GTO enjoys a subtly cleaner and more aggressive design. It is somehow smoother, its lines more taut and muscular as the bodywork sought to cover the chassis and cabin without excess fuss. Echoing the 250 GTO, the 288 had sectionally semicircular nacelles feeding air to the engine compartment, and angled fender gill-slits and hood louvers for exhausting the air. The GTO, however, had its compact V8 situated longitudinally behind the cabin, and its transaxle was clearly visible to those behind the car. Amongst the most noticeable styling details were the extremely deep front airdam beneath massive auxilliary lights suitable for illuminating a dusty, rainy, or dark race course, high-mounted side mirrors to give the driver a clear view over and around the large wheel blisters, and a highly aggressive kamm tail suggestive of stability at extremely high speed. These visual cues were all accurate to the car's purpose and capability. As interesting was the almost complete lack of brightwork: even the cavallino between the tail lights was black. The GTO required nothing extra to be noticed, although like all racing Ferraris it carried the Scuderia Ferrari enamel badges on its flanks; visual subtlety was a hallmark. 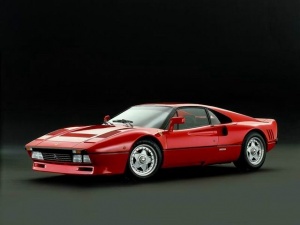 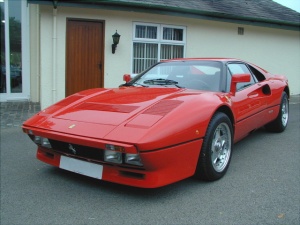 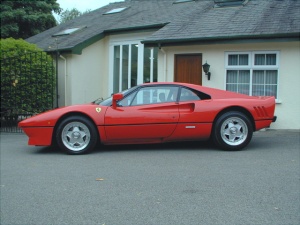 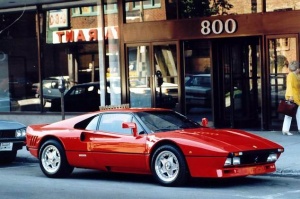