In ancient Roman mythology, Mercury was the god of speed and agility and the messenger of the heavens. At the North American International Auto Show, Mercury is a brand sending a message that modern design will lead its rejuvenation, beginning with its new Messenger concept coupe. Mercury is returning to its roots as a design leader introducing the Messenger concept, a distinctive and energetic high-performance two-seat sports coupe. The Messenger concept car represents the first expression of Mercury's new design DNA with a clean, technical appearance that begins to establish the look of Mercury products still to come. Mercury will introduce four new products over the next four years including a minivan, a small sport utility and two cars. "The body surface reflects the car's power and grace, with flowing body lines that are accented with purposeful air intakes and outlets," says Gerry McGovern, design director, Lincoln Mercury. "The dynamic fluidity of the Messenger's lean and taut form is expressed at rest as much as it is in movement." Exterior Design Exterior The Messenger's proportions are the direct result of the dramatic vehicle architecture - clean and sculpted with a tautness and agility that transcends the vehicle's design and handling characteristics. It is a vehicle designed to be uncompromised in capability and performance. The long hood houses a powerful 4.6-liter modular V-8 engine. The energetic stance and supple appearance of the Messenger are enhanced by 20-inch wheels with 305mm wide tires on the rear and 19-inch wheels with 275mm wide tires on the front - a tire/wheel combination that allows the car to firmly put down onto the pavement all the power the V-8 can generate. The spoke wheels have a turbine theme, with vanes that reflect the appearance of the Mercury "flying M" logo. The functional vanes help direct airflow over the vented brake disc and high performance brake calipers, further communicating the car's high performance capabilities. One aspect of Mercury's future design DNA is embodied by the stacked element theme at the front of the vehicle with distinctive front lights and vertical grill elements. The rear lights convey the DNA message with sequential taillights that repeat the theme. Large, beautifully sculpted front air scoops and outlets at the front and rear of the vehicle provide a purposeful and powerful look. 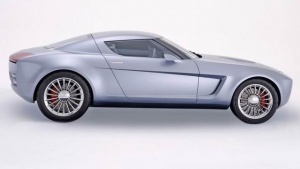 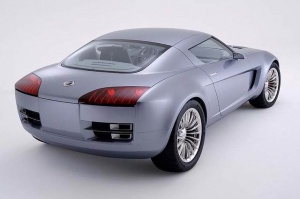 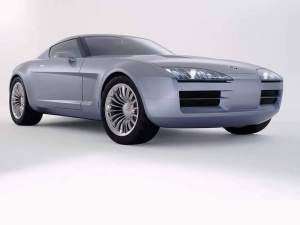