TOKYO (Oct. 24, 2007) - Nissan Motor Co., Ltd, today announced the launch of the Nissan GT-R, a new multi-dimensional performance machine that lives up to the concept of “an ultimate supercar enjoyable to anyone, anywhere, at anytime”.  The 480PS twin-turbo GT-R features a newly developed Premium Midship package, including the world’s first independent transaxle 4WD developed independently by Nissan.  GT-R will be available mainly through Nissan High Performance Centres nationwide in Japan on December 6th. GT-R was developed with a new understanding and appreciation of the Earth’s natural forces – gravity, inertial force and aerodynamics – and translates those forces into a completely new design, maximising tyre grip and airflow.

Basic vehicle dynamics and integration with the driver have also been examined, resulting in new componentry and creating a Human-Machine Interface (HMI) never seen before in the marketplace.  All of these theories have been integrated to balance “speed and efficiency,” “high-output with environmental mindfulness” and “high performance and safety”. Taking these factors into account, Nissan created the all-new Nissan GT-R, which offers advanced high performance for secure and enjoyable driving free of climatic, road condition or driving technique limitations.  GT-R offers ultimate performance for virtually every driving situation – whether it is the Nurburgring circuit, where GT-R has been developed, to snow, rain or urban areas – all manageable by the GT-R driver through advanced technology and driving dynamics.

GT-R’s unique characteristics are instilled not just in the vehicle’s design, but also through a specialised production process.  Carbon fibre, aluminium and steel components are assembled with a special high-precision process, which includes a series of vibration tests.  Engines and transmissions are assembled in a “clean room” environment and upon completion every GT-R undergoes a battery of comprehensive tests to ensure the proper operation of all vehicle components.   To properly support the all-new GT-R, Nissan has established special Nissan High Performance Centres in Japan, where all certified advisors and technicians have received extensive training.  Total support for the GT-R owner is offered for the first three years of ownership, including measurement and adjustment of the engine, transmission and wheel alignment after the first .

Packaging and Driveline Suited for a Supercar

The all-new Nissan GT-R uses a Premium Midship package, an all-new platform which enables the use of the world’s first application of an independent transaxle 4WD system.  The transaxle’s layout places the dual-clutch transmission, transfer case and final drive at the rear of the vehicle (instead of the usual front location), which enables vehicle weight to be evenly distributed throughout the car.  This gives GT-R a superb front-to-rear weight balance, while enhancing leg and foot space and allowing for an optimal pedal layout.  Under the hood, GT-R features an all-new 3.8-litre twin turbo V6 “VR38” engine, featuring plasma-sprayed bores and a special twin-turbo exhaust manifold system.  A secondary air management system enables the newly designed power-plant to provide approximately 40kgm of torque during ordinary low-rev driving, which provides for an optimum air-fuel ratio for around-town efficiently and helps GT-R meet ultra-low emission vehicle (U-LEV) standards in Japan.

GT-R’s new engine produces 480PS (353kW) at 6400rpm and maximum torque of 60kgm (588Nm) from 3200 to 5200rpm.  Putting the power to the ground is an all-new GR6-type dual clutch transmission, with paddle shifting and a Borg Warner six-plate dual clutch for direct control.Suspension duties are handled through a special Bilstein DampTronic system, which utilises all pertinent vehicle information to provide appropriate damping forces for all situations and helps maintain a high level of control for straight-line driving, cornering, and braking. Braking is essential for a daily-driven supercar and GT-R features large Brembo full-floating drilled rotors, low steel high stiffness brake pads and Brembo mono block six-piston front and four-piston rear callipers, which in combination minimise fade and provide stable braking.  Run-flat tyres, exclusively designed for use on GT-R, balance high grip and all-weather capabilities and a comfortable ride in all driving situations.  The tyres are designed to maintain their integrity for 80km of travel at and also provide a level of performance after a loss of pressure.

Environmental technologies include extensive work to create an U-LEV certification in Japan for the 3.8-litre twin turbo engine and reduced levels of volatile organic compound in the cockpit.

GT-R’s styling follows the function over form theory.  Every styling aspect, from the overall design to the smallest details, is created to maximise the vehicle’s driving experience – as well as suggesting GT-R’s “supercar” level of performance.  Utilising advanced aerodynamics, GT-R’s aggressive styling evokes the lines of a well-trained athlete, combining strong character lines with smooth and solid areas.  GT-R’s body is created with a combination of steel, carbon fibre and aluminium, providing a unique combination of stiffness and lightness.  GT-R features a low coefficient of drag of 0.27 which enhances fuel efficiency, which is balanced with high levels of front and rear down-force, which provides GT-R with enhanced grip in all weather situations.

The front bumpers express power and stability, while the “aero-blades” on the leading edges provide optimum airflow around the tyres and along the body.  The scoop in the bumper trailing edges assists in providing front down-force and optimisation of side airflow.  The aggressive front end, with a large bonnet bulge and single air intake, provides a sophisticated style as well as undisturbed airflow for power and cooling.  New “super wide beam” headlights feature three additional sub-reflectors (compared to conventional lights) to give a wider spread to the illumination area.  GT-R’s large, four-passenger cabin features a sloping “aero blade canopy” roofline and curved C-pillar “sword edge,” which expresses the distinctive GT-R identity, as well as facilitating air flow around the rear of the vehicle.  GT-R’s hallmark four-ring taillights, efficient rear spoiler and large, integrated φ120 exhaust tips, provides an appropriate rear view of GT-R, as well as optimising airflow along the top and under the vehicle. The high level of advanced technology is evident even in GT-R’s paint – which utilises a “double clear coat” and “anti-chipping” process and is painstakingly hand-polished by craftsman.  GT-R features Ultimate Silver as a special new colour.

An Interior Suitable for Daily Driving or Supercar Duties

Key to GT-R’s usability as a daily driver or a high-performance supercar is its interior, which is designed to balance functionality, safety and comfort.  Sculpted performance bucket seats give the driver and passenger a comfortable driving experience, and soft pads are utilised on the lower portion of the instrument panel and doors to give an extra level of comfort and safety.

The instrument panel surrounds the driver, with all meters and multi-function meter at a uniform height to minimise the driver’s head movement when travelling at high speeds.  A large centre-mounted tachometer, with gear display on its upper right, as well as the easy-to-read graphics of the display, gives the driver instant detailed information, essential for the performance nature of the GT-R  Functional style is also evident in GT-R – each meter features a dial plate design that evokes the idea of engaged gears, as well as a three-dimensional metal-like ring, suggesting the multi-dimensional performance of the GT-R.  A large, metallic-framed centre console features the ergonomically designed shift lever and a red “engine start” button.

Adjustability is central to the daily-driver nature of the GT-R, with a special “set-up switch” located in the centre of the instrument panel.  This switch enables the driver to adjust transmission shifts, shock absorbers and the Vehicle Dynamic Control in three settings – Normal, Comfort or R, the high-performance setting designed for the GT-R “supercar” application.A high-speed, high-capacity CARWINGS navigation system is available in Japan, with a powerful 30GB hard disk drive, features an easy-to-use touch pad, as well as traditional navigation switches.  The screen interface features not only the navigation system, but also an enriched entertainment system with a Music Box hard drive, DVD and CD player, and Bluetooth® audio function.  For special use in the GT-R application, the multi-function display also includes mechanical and driving information for safe high performance driving, including accelerator opening, brake pedal pressure, and steering angle.  It also includes an “optimal gearshift map,” to encourage economical vehicle operation.

A specially designed BOSE sound system includes two forward-facing woofers in the rear centre armrest area combined with traditional door speakers.  All speakers are mounted in rigid aluminium die cast panels, which combined with the design of the system itself, provide sound quality suited for a supercar owner. 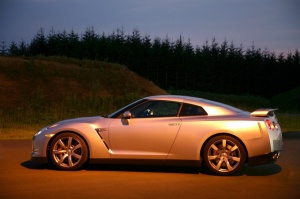 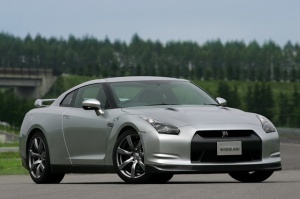 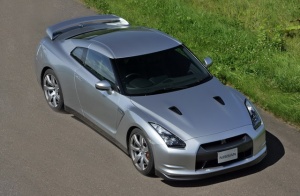 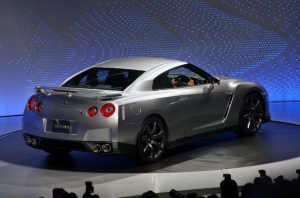 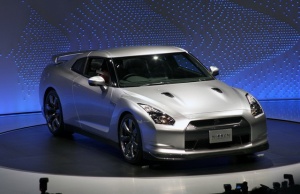 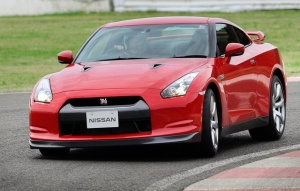 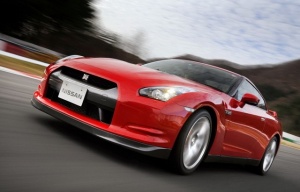 He came, he drove, he conquered – in many comparative tests: The Nissan GT-R has dethroned the Ceasars of the Nordschleife with impressive lap times.