21st February 2011: Jaguar has commissioned a beautiful ‘Collectors’ Edition’ coffee-table book to mark the 50th anniversary of the car that stopped the automotive world in its tracks – the E-Type.

‘E-Type – 50 Years of a Design Icon’ charts the remarkable story of this revolutionary car and is available for online purchase now.

Launched at the Geneva Motor Show in 1961, the E-Type was the fastest production car in the world, capable of an incredible 150mph. Costing half the price of its rivals, the E-Type was the car to be seen in. Football legend George Best was an owner, along with Brigitte Bardot, Tony Curtis and Steve McQueen.

A must-have for both E-Type owners and Jaguar enthusiasts alike, the book is available in two stunning formats: a premium version and a limited-edition VIP volume. Each individually numbered VIP book is hand-bound in a specially commissioned reproduction of the E-type’s original upholstery leather and presented in its own slipcase.

The book can be pre-ordered for delivery in March from: www.fpcreative.com/sales/etypebook 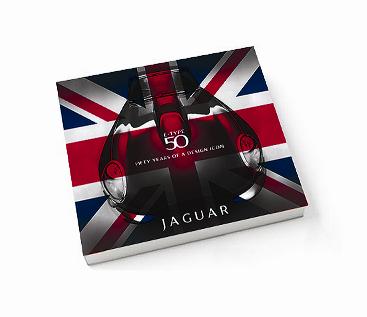